If you wanna be in a musical, singing auditions are usually required. Now don't panic, We're sure you have a beautiful voice.

We've done our fair share of musical theatre, so we know that wonderful feeling of singing your face off, baring your soul onstage, and hearing that thunderous applause. It's quite a thrill.

When you think of singing auditions, you probably think about American Idol.

At the beginning of every season, potential contestants are shown parading into the audition room. They wear big numbered signs on their chest, sing a cappella, and are given feedback about their talent. It's like watching a train wreck: you don't want to look, but you can't turn away.

That stuff is great for ratings, but it's not reality. (Thank God.) 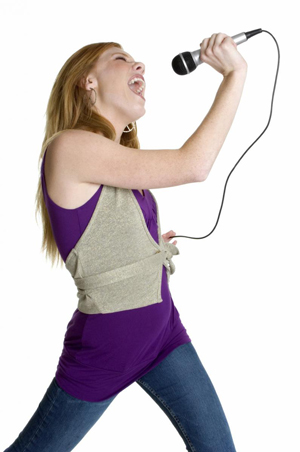 For starters, you won't have to sing a cappella. There's almost always an accompanist in the room. And there's no feedback from the auditors, just a polite "Thank you."

Don't let me fool you, singing auditions are high pressure situations. And how you perform will determine if you get hired. The very best thing you can do? Prepare.

Preparing for your Audition

Frequently, you'll spy a musical theatre actor walking around holding a three-ring binder. That's his songbook. It contains the 15 to 20 audition songs that he rehearses and uses at his auditions.

Your own songbook should contain the piano and vocal sheet music to your audition songs. When you walk into the room, it goes in front of your accompanist.

It's important to create a diverse array of audition songs. Pick from different genres of music, and you'll be prepared for any type of audition.

Singers often ask if they should use choreography in their songs. Well, that depends. Do you think it's appropriate?

You may wish to use light choreography in your more comedic songs, if it seems to fit. But if you're singing a heartfelt ballad, perhaps you'd rather just stand there and sing with truth.

If you choreograph your audition songs, commit to that 100%.

The goal at singing auditions is the same as with your monologues, resumé, headshot, etc. Present your best self. Because you're selling you. Do that, and we promise you'll be working as an actor in no time.