Dealing with Fear and Stage Fright

If you're dealing with fear of public speaking, also known as stage fright, it can be a major obstacle to your acting success.

So many actors suffer from stagefright on every opening night. Their heart rate skyrockets, and there's a pounding in their chest. But along the way, actors learn to deal with it, and you can too.

Learning to overcome your stagefright at auditions and performances is a challenge every actor must face. Did you know that Dame Judi Dench, one of the most celebrated actresses in Great Britain, suffers from severe stage fright even after 50 years of acting? And Dustin Hoffman has admitted the same problem.

So if you're embarassed because you thought you were the only one, just remember this: The more personal, the more universal. If you're suffering the emotion of fear, everyone else is too. Even the biggest movie stars in the world. 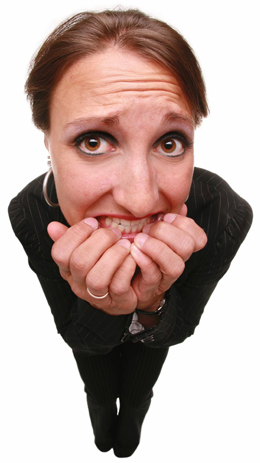 Part of learning to control your stage fright is knowing what fear is and how it works.

Believe it or not, the emotion of fear is healthy. It's a series of chemicals (adrenaline mostly) released into your bloodstream. They give you super speed and super strength. They improve your hearing, vision, sense of smell, even speed of thought. Lasting for about 30 seconds.

This uncontrollable reflex is known as your fight or flight response. Almost all animals have one, including humans. It's programmed into our DNA. Fight or flight helped us to outrun and outwit those lions, tigers, and bears while we were evolving.

In other words, fear helps us to stay alive.

The Symptoms of Stage Fright

Dealing with Fear by Using These 6 Tips

Whether you're on stage, on a roller coaster, getting married, or being held at gunpoint, the symptoms of fight or flight are the same. Don't try to get rid of them. Instead, make them work for you by channeling them into a focused and energized performance. Here's how:

Stage fright is normal and healthy. And if you're dealing with fear in a healthy way, you can use it to boost your performance and get better results in your acting.