One of the questions we get asked most frequently here at AYA is this: “Am I too old to start a career in acting?" Let’s take a look at the numbers...

Over the past 100 years, the median age for leading male film roles has fluctuated between 37 and 45. The median age for leading female film roles has been about the same — around 32 or 33 — since the 1950s. While male actors can enjoy rich careers that last well into their 40s and 50s, female actors are unfortunately treated like they have an expiration date.

Overall, the study showed that women get more parts before the age of 30 but less overall when compared to men.

This is all according a study conducted at Clemson University, which examined nearly half-million different roles played in more than 50,000 feature films between 1920 and 2011.

Let’s look at it another way...

Here's a graph from SAG-AFTRA (the labor union for film and TV actors) that displays the distribution of employment by age in 2016. 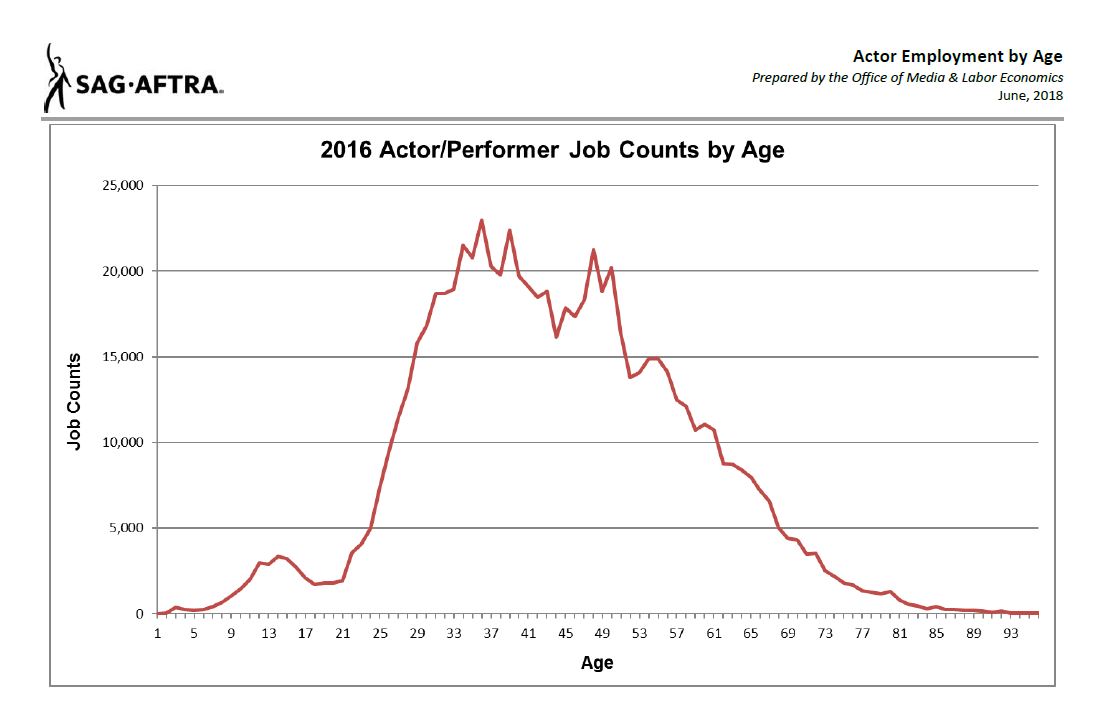 There's a huge spike in jobs filled by actors aged 26 and 27 - no surprise there. (And many of those 26 year-olds are playing ten years younger on screen.)

But notice that there are two ages where the graph breaks 20,000 jobs - one at approximately age 35. The other at a whopping age 49.

The last thing you'll notice is that the available jobs don't drop off too dramatically as the actor ages. It's more of a long, graceful decline.

So what can we extrapolate from these numbers? You have way more time than you think.

A Less... Scientific Study into the Age of Actors

At AYA, we recently conducted a little study of our own...

We scoured our inbox (aceyouraudition@gmail.com) for this question: A"m I too old to start acting?"

As of the writing of this article (May 2019), we've been getting email for 9 and a half years. At this point, we have received literally hundreds of these inquiries over nearly a decade.

The average age of the actors inquiring... was 14.3 years old.

Everyone thinks they've missed their shot. Even the 14 year-olds. But they each have a long and rich career ahead of them. And so do you.

"There is a fountain of youth: it is your mind, your talents, the creativity you bring to your life and the lives of people you love. When you learn to tap this source, you will truly have defeated age."
Sophia Loren, actress, 1934 -

Becoming an Actor is HARD, No Matter the Age

Make no mistake. If you are trying to make your living as an actor, the deck is stacked against you. It will be an uphill battle, no matter what age you start.

But the statistics above don't define you, nor do they define your chances of success.

First of all, the Clemson study only looked at leading film roles. It doesn't account for supporting roles or background work. It also didn't examine the market for television, new media, commercials, or industrial work. There are tens of thousands of high-paying acting jobs out there that don't hew to the traditional narrative studio picture. Those jobs require actors of all ages.

And as Hollywood has entered the 21st century, there are more jobs than ever before. According to the United States Department of Labor, the job growth for actors is accelerating faster than other industries - at a clip of 12% from 2016 to 2026.

Where will all these new jobs coming from? There is an ever-increasing demand for new film and TV. The number of streaming services (such as Netflix, Hulu, and Amazon Prime) is also set to increase, as well as the volume of titles being produced on each.

As long as Hollywood is writing roles of different ages, they will need actors to bring life to those roles.

A 20 year-old can't believably play a character who is for a 49 year-old. You need to cast an actor who can play 49 year-old for that.

The truth is this: Hollywood doesn't care how old you are. They care about whether you can solve their problem. Regardless of how old you are - if you can believably play the role, you will be considered.

See if you can answer the following questions...

How are your cold reading chops? When you receive your audition sides, what's the first thing you do?

Are you in training right now? What classes are you taking?

Who have you met in the last 7 days? Do you remember their names? How will you keep in touch?

Lastly, how do you view your career? Is this a do-or-die situation? Are you desperate to get your big break? Is your self-esteem yoked to your showbiz success?

Or can you keep things in perspective? Can you be grateful for every audition? What else have you got going on these days, outside of acting?

If you're having trouble answering these questions - that's a red flag. You need to invest more energy and attention into answering them - rather than asking whether you're too old.

"So, here's a guy who didn't even have his first headshots until after his 36th birthday. Well, he recently turned 40 and had his first network co-star (on CSI: Miami), has been in SAG for three years, has done 30 films, and remains in a wonderful scene study class. He has two agents and a manager and for all intents and purposes, he's a working actor who "started late." He never tried to be anything other than what he was: Someone with life experience and the "I'm here to have fun" mentality, grateful for the opportunity to audition with "the big guys." The fact that he was invited in to read for roles alongside actors with MFAs from League Schools was awe-inspiring for him. That's a beautiful thing about this business: Anyone can have a shot at it."

Is it hard becoming an actor? Yes. Does it get harder as you get older? Possibly.

The real question is... are you going to let that stop you?